As a Software Engineer (and nerdy tinkerer), I have always been interested in trying out new technologies. Luckily I've had the chance at work to play with Amazon Web Services for a few things here and there. Played around a little with Windows EC2 instances (prior to them getting Windows 2008 which meant no ASP.NET MVC for me at the time). Did a little bit with S3. But the thing is as an Engineer who has spent an inordinate amount of time playing in the Windows realm I have been trying to diversify.

I've spent my own time playing with Python, Ruby and Haskell. I even managed to convince work to buy me Macbook Pro

. The problem being that since I spend a lot of time living in the Web space, generally my ideas for coding involve the Web. I dont really have the extra income to have a Linux server at my beck and call when I want to try something out, so I've been pretty much not doing a whole heck of a lot. But Amazon has recently fixed that for me!

For those of you looking to try out cloud computing, or for someone trying to get that startup off the ground for a very low price Amazon now has a Free Usage Tier! 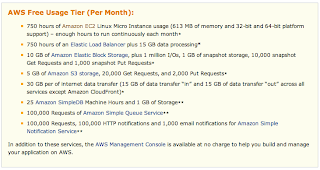 Thats right! Now I get the chance to not only play in the Cloud (hooray! Resume buzzword! sigh.) I also get a Linux instance that is up all month! That means I can pretty much spin up an idea check it out, see if I like it and if I want to continue. For those entrepreneurial folks out there. It means you can have a free server to create your web application on, and you aren't out any money for things like data centers.
Dig it!
Posted by Unknown at 7:54 PM

Email ThisBlogThis!Share to TwitterShare to FacebookShare to Pinterest
Labels: Coding