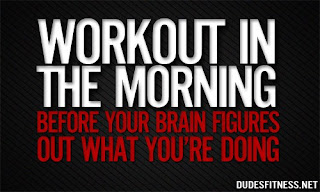 I wake up at 5:30 AM every weekday morning to get my ass to the gym. I REALLY DO NOT LIKE GETTING UP IN THE MORNING. This is usually compounded by the fact that I have a toddler who I'm convinced could keep himself awake for a week straight if we didn't force him to lay down in a dark room, and by my teenager (I mean he's a teen... need I say more?). It really isn't uncommon for me to finally hit the bed at 11:00 PM, and sometimes even later.

So every morning when that fucking alarm clock goes off (and I do hate that fucking alarm clock), I immediately start dealing with my brain saying "what the fuck?" That's right, the first thing in the morning I have to deal with is my inner monologue coaxing me back to sweet slumber. And the first thing I have to do is to tell that inner voice to go to hell. You know what? It's really fucking hard. Every. Single. Day.

I wish I could say I always come out victorious in that battle, but the reality is I lose sometimes. That's OK, as long as I don't let it happen to often. The thing is, in order to truly beat that inner voice, the one that tells you that you can't do something, you have to find some reason to latch on to that says you can. I know, it sounds completely cliche, but its the truth.

Steve Jobs said (and I'm paraphrasing, but I included the video below) that in order to achieve amazing things as an entrepreneur you have to have passion. Passion for what you do, passion for what you are trying to create. The reason you need that passion is that being an entrepreneur is hard! You have to be a little crazy to be successful, because otherwise you would just give up!

The reality is that finding your motivation to be healthy, and make lifestyle changes is a personal thing. You have to make the time to find it for you. You have to believe it, totally and entirely, because in reality that's the thing that will get you to achieve your goals. That's the thing that drives you to get out of bed at 5:30 AM and hit the gym. That's what makes you say no to the birthday cake being passed around the office. Willpower alone just isn't going to cut it.

[I decided to embed the Steve Jobs YouTube Video]